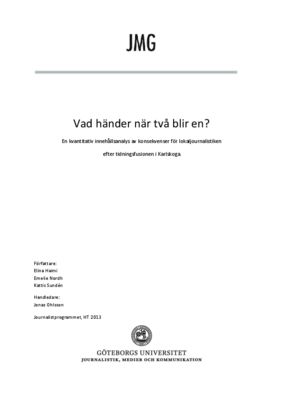 Authors: Elina Haimi, Emelie Nordh, Kattis Sundén Title: What happens when two becomes one? Level: Bachelor of Journalism Location: University of Gothenburg Language: Swedish Number of pages: 50 A simple rule that any handbook in journalism will tell you is that it’s better, if not necessary, to have at least two different sources, rather than one, when you tell a story. This will keep information accurate and non-biased. You will get closer to the truth if you hear more people. We started to wonder if this would be the case with news papers as well. Will you get a more diverse and multifaceted news coverage with more news papers covering a story than one? This curiosity that we had led us to look all over Sweden for examples where two newspaper had emerged into one, or in other words – where one larger newspaper had bought the smaller one. We wanted to compare how the news coverage had changed since the incline in newspapers. Our investigations led us to Karlskoga, a small city with approximately 30 000 inhabitants. Karlskoga Tidning, owned by the NWT-group, bought Karlskoga-Kuriren, owned by Promedia, in 2011. Cuts were being made and the editorial staff shrunk. Now they had one news team instead of two. The company takeover was unique though, due to the fact that they kept two different heads and two different pages with letters to the editor. We carried out a quantitative content analysis in the two newspapers before and after the take over. In total we analyzed 3394 different articles from the years 2000, 2007, 2011, 2012 and 2013. We also conducted some interviews with important people around the newspapers. One example of a conclusion we made is that nowadays the content concists of less politics and more culture events. There are also more common people that get to express their opinions in the articles and less politicians. We also found out that the small places in the region get less coverage than before. Overall we saw that Karskoga Kuriren had had to adjust more to its new owner. It had for example lost a lot of the coverage of Örebro.