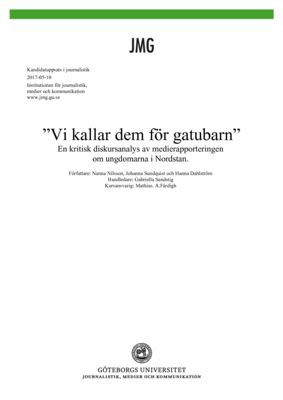 Abstract
Title: “The kids of the street”- a discourse analysis about the reporting of the young people in
Nordstan.
Author: Nanna Nilsson, Hanna Dahlström och Johanna Sundquist
Subject: Undergraduate research paper in Journalism studies, Dept. Of Journalism, media and communication (JMG) Gothenburg University
Term: Autumn 2017 (2017-05-09)
Supervisor: Gabriella Sandstig, JMG Gothenburg
Keywords: Orientalism, Nordstan, immigrant youth in media, immigrants in media and critical discourse analysis.
The major objective of this study is to investigate the discourses and the construction of an “in”- and “outgroup” in the reporting of the young people in Nordstan in Swedish newspapers, and to study how media has depicted the young people. This has been done through a Critical Discourse Analysis (CDA) method, based on Berglez analysis schedule, together with our theoretical points of the construction of the “other”, framing, postcolonialism, orientalism and Frida Sandströms results of subject and object. To fulfil this aim, four questions were constructed:
1. What are the articles about?
2. What role are the youth given in the reporting?
3. How is an in- and outgroup constructed in the reporting?
4. What discourses dominate the news reporting?
We’ve sorted all articles covering Nordstan where young people were in focus during the period of 1st of June 2015 until the 15th of Mars 2017. The empirical part of this study was conducted in May 2017. After sorting out irrelevant articles for our phase, 112 articles remained.
We answered the first question using Berglez analysis schedule, element one and two, based on the 112 articles. We conclude that these articles contain five themes: “crimes”, “the youth situation”, “insecurity in Nordstan”, “politics” and “police work”. Question two, three and four were answered using the same method, based on twelve articles that were chosen through
a strategic selection. These articles were published during the period January 2016 to January 2017.
On the basis of the results of this research, we identified a number of trends in how the news depicted the youth – “quiet youngsters”, “detailed descriptions of the strangers”, “the problem”, “the group”, “ignoring the past” and “the authority”. We also identified that the youth are not the subject of the reporting and that an in- and outgroup were constructed in several ways in the reporting. Partly in how the text is built up, but also in how the articles
talked about the youth as strangers, who are not like us.
We essentially highlight three discourses. First, an authority discourse that revolves around the youth in Nordstan as an issue for the authorities to handle. Second – a discourse were the youth is seen as a problem that has consequences for both the police och the public. And third, a discourse in which the youth are talked about as strangers.